Back in 2015 Alexandra Meyer was picked as HAW Hamburg’s DAAD Prize winner for that year. The American Bachelor student was awarded the €1,000 prize for her exceptional grades and her volunteer work in a food-sharing project. Now, five years down the road, we caught up with her to find out where her business degree had taken her and found her - literally - at Facebook. She says the secret of her success is persistence fuelled by passion and that she never stops learning. 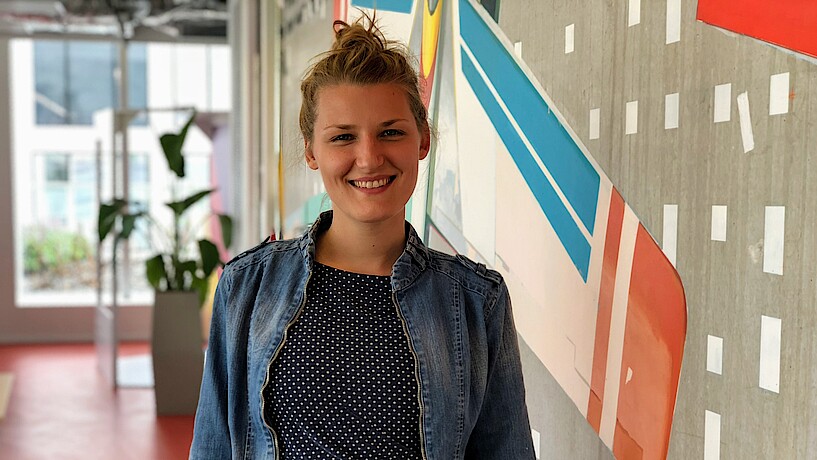 ‘I joined Facebook’s Small and Medium Business Team in their European headquarters in Dublin, Ireland at the beginning of 2018. It was a tough decision to leave Hamburg, where I had made my home during my studies in Germany, to start my new career and life but it was the best decision I could have made. My first role was in Sales, where I worked directly with clients and helping advertisers use our Ads Platform to ramp up their advertising presence on Facebook and Instagram.

The path to this career choice was set during my studies at HAW Hamburg. I had decided to study in Germany for a few reasons. One, I had grown up speaking some German with my father, and while my reading and writing skills weren't the best, I felt like I could fathom the language well enough to do my studies in Germany. Secondly, since being an exchange student in the 10th grade from the US to Germany, I had fallen in love with the culture, walkable cities, and wholesome lifestyle ­– I just knew I belonged in Europe. And finally, student tuition in Germany is just so much more feasible than the 250K+ dollars you spend on a four-year degree in the US.

Looking back at my time at HAW Hamburg, I'm glad to say, I made the right choice. I remember the awesome professors and mentors I was able to work so closely with. But one aspect remains most memorable to me: the internship experiences. I only had to complete one mandatory internship as part of my degree, but I love learning and during my studies I interned in my first year at a large investment bank, in my second year I worked for a container shipping corporation and in my third year I was at a high-fashion start-up. It was however, my internship in my fourth year that was life-changing. I got an internship with the YouTube Marketing team for Google. After having spent time in some very structured industries with little innovation and change, technology felt exploding with possibilities. It was invigorating and I knew this was where I wanted to work after graduation.

After Google, I wrote my thesis, while simultaneously applying for full-time jobs after graduation. In the eight weeks of thesis-writing, I flew around Europe to interview with companies like Amazon, Facebook and Google – a dream come true, and also a ton of work. And was ecstatic when I got the call that I was accepted by Facebook, my first-choice company.

Just a year ago I transitioned roles to the Business Education Team at Facebook. My new role involves working with larger audiences that include groups such as non-profit organizations, universities, agencies, clients and startups. Last year my work involved a lot of travel to Nigeria, Israel, the US, South Africa, as well as several countries within the EU. My focus was teaching these groups how to best use both organic and paid tools to help reach their goals on social media. It has been thrilling and I love engaging a classroom. I learn so much each time I deliver a training! Since everything has moved to virtual communication in the last months, I have recently been teaching by way of online webinars, which has been exciting and growing too. I love to meet people from all over the world and help them use Facebook in a way which is valuable to their business or organization.

I would say the most important skill acquired is persistence fueled by passion. For both of my roles at Facebook, I honestly didn't have all of the credentials in the job description (who ever does?). But each time I knew how much I wanted the job, and so worked to convey that to the hiring managers. I did a lot of interview practice (another tip: practice for your interviews! I prepared probably 30-40 hours in total). No one wants to sit in an interview where you're not really sure if the person is excited about the role. So, for example, when applying for my second role in education, I had had only 1.5 years of work experience up to that point, and they were looking for someone with 5+ years. I remember saying to the team leader "Please let me interview anyway, and then make your decision after that." I wanted to be persistent and not take a “No” up-front. In the end, I was hired for the role, even though I was "underqualified" by their hiring standards. And now, after being in the role for a year, it's honestly a perfect fit for me. But just let me add: when showing passion, it needs to be sincere passion (it's obvious when you're faking it), but showing that is a crucial part of the hiring decision.

Thanks for checking in on my journey. I look forward to connecting again soon!’