Studying abroad in times of corona: Hunter Uman, exchange student from the University of Florida, had just started his exchange semester in aeronautical engineering, when the corona pandemic struck in March 2020. He decided to stay in Hamburg, for reasons that had little to do with HAW Hamburg, but definitely for all the right reasons. We caught up with him recently, because it turns out his semester in Germany was quite the “life-changing experience”. 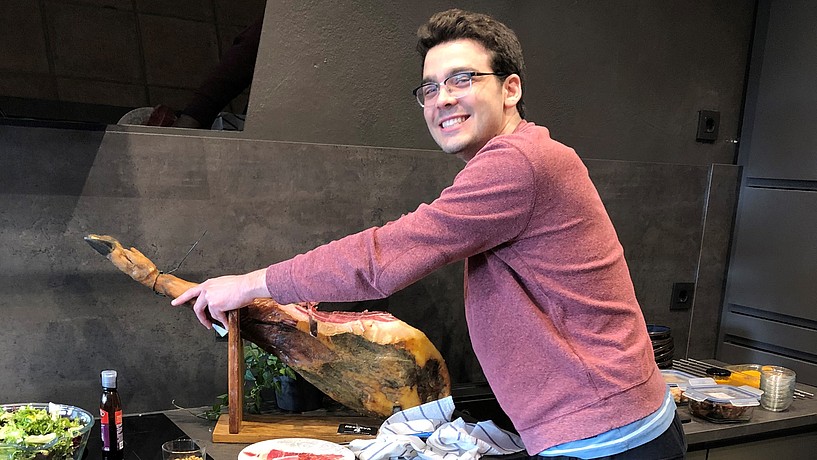 “I haven’t met a person who has studied abroad who hasn’t been excited to tell me just how “life-changing” the experience was for them. That’s not to say those people don’t exist. In my case, in order for me to have such an experience, I needed to do it twice: once in Belgium to practice my French and once in Germany. Choosing to study abroad in the fall semester meant I had to study abroad for a year because the semesters in Europe are not in sync with the US. Looking at English-language options for my Spring semester, my study abroad advisor suggested Hamburg.

My grandmother was born in Berlin and moved to Hamburg in her teens. After graduating from university in Hamburg, she moved to the US. So, that was a nice connection for me. And I figured once I finished up having my first “life-changing experience”, I’d just have to hop on a train to Hamburg for the second. Easy. My parents planned to visit me in Germany; my grandma was supposed to come along as well. And so, my year was set. It was going to be nice. Did I mention this exchange semester was in 2020?

The singular most freaked out I’ve ever been in my life was during the three days after I landed in Belgium. I was, for the first time, in a place where English wasn’t the native language and I needed to find a place to stay because I only booked the hostel for two weeks because the university said it would be impossible to find housing from abroad. But the second most freaked out I’ve ever been was in the lead up to Hamburg. I guess it was a mix of reverse culture-shock, isolation, burgeoning COVID-19, and the knowledge that soon I would have reverse-reverse culture shock and have to move into a whole new apartment and deal with the exhaustion of making new friends.

Turned out the first week in Hamburg was actually pretty fun. I must congratulate HAW Hamburg on planning some pretty worthwhile events. After a week of straight socialising and exploring the city, I had the beginnings of what you would have called a solid crew. My best friend from the US also came to visit Hamburg for a couple days and I felt like a local showing him all the important sights just days after I had been shown them by the university. Most importantly however, he helped me get talking to a girl from Spain and to find the right words to ask her out on a date. And that girl turned out to be very special. More about that later. So, before the corona pandemic really hit Germany, life was pretty good.

On the academic side of things, I was signed up for three aeronautical engineering classes as well as sound design for my film minor. Unfortunately, I had only one in-person class for each subject before COVID-19 meant the German universities had to close and everything pretty much ground to a halt. After that, everything melted together. My professors switched their teaching to an online format and life became a homogeneous mess of cooking at home, watching Netflix and watching online lectures whenever I felt like it. I even lived up to my Jewish heritage and gave bagel-baking a try. There were no places to get good bagels in Hamburg, so this was a necessity I would repeat nearly every week.

My favourite aeronautical engineering class was aircraft engines with Professor Kozulovic. Despite the online format he made the material in his lectures exciting. He also posted practice problems regularly and offered weekly ZOOM sessions if you had questions about the material. He was kind enough to post practice exams so we knew what we were getting into going into the final exam and as things opened up again towards the end of the semester we were able to take the exam in person. As for sound design. I loved this course and Professor Görne was a gem. Though we didn’t have the resources we would usually have had in a normal semester, he made the whole “sound design for a film scene” final project a joy to work on in our own little home studios. It was a nice break from the corona pandemic to be able to be absorbed in creating a world of sound for this class and the way Professor Görne taught the class made it feel like we were in a normal semester.

Aside from classes, the one pure good thing to come out of this time and probably the only reason I stayed in Germany to begin with, when all the other US exchange students were called back to the US, was my girlfriend Ainhoa. The very same girl from Spain I went on a date with back when times were more normal. During the semester we would cook together, go on runs around the Alster Lake, occasionally visit the beach at Lübeck or hang out in the Stadtpark. Later in the semester Germany opened back up to the new socially-distanced normal, but exam season kept me just as inside as before. And then, just like that, my time in Germany was over. Or was it?

Another side effect of this time in Germany was that, strangely enough, I actually really liked living here and I really enjoyed learning the language. I took a beginner’s German class at HAW Hamburg and with an enormous amount of quarantine time spent on Duolingo, I managed to place into the higher A.2.2 level at the Goethe Institute. Which is why the story of my time in Germany isn’t over yet. Classes at the University of Florida in the Fall were also all online in the Fall semester. So, instead of returning home in August 2020 as planned, I enrolled in a German course in Munich (where some of my German friends from Belgium live) and I moved there with my girlfriend. In November, when cases were starting to rise again across Europe, I went to stay with Ainhoa in Spain for two months. She lives in a little town called Villafranca de Navarra and it was the most peaceful time I've had in Europe during the pandemic.

Fast forward to January 2021. I recently returned to the US because I actually have a couple of in-person classes I need to attend. But I am planning on returning to Europe as soon as possible. Currently, I am aiming to finish my degree at UF in the Fall and (hopefully) start a Master’s degree at TU Munich in the Spring of 2022. My girlfriend is also applying to go there. While in Munich the HAW Hamburg International Office connected me with another former US exchange student, who had also returned to Germany to study at TU Munich and who also has a Spanish girlfriend, who he met while on exchange in Hamburg! So, we had lots to talk about and he had lots of great tips for me.

I believe that with an engineering degree and a good knowledge of the German language, being employable in Germany should be possible. A German Master’s degree should improve those chances even more. When my quarantine period ends, I’m going to start visiting my grandmother, who was vaccinated last week and we are going to talk only in German. I'm very hopeful for the future with President Biden and the vaccine and me finishing up my studies. So, if I was to look back on my time abroad and in Hamburg specifically, I guess you could say it really was life-changing.”