When corona struck in March 2020 many of our exchange students from around the world sadly had to return to their home countries. Jesse Mar Ramirez, film student from California State University, Long Beach (CSULB), felt he had put too much effort into getting to Germany, so he decided to brave it out and stay in Hamburg. A bike and a 'special someone' were his saving grace for a semester that was an all-round success. 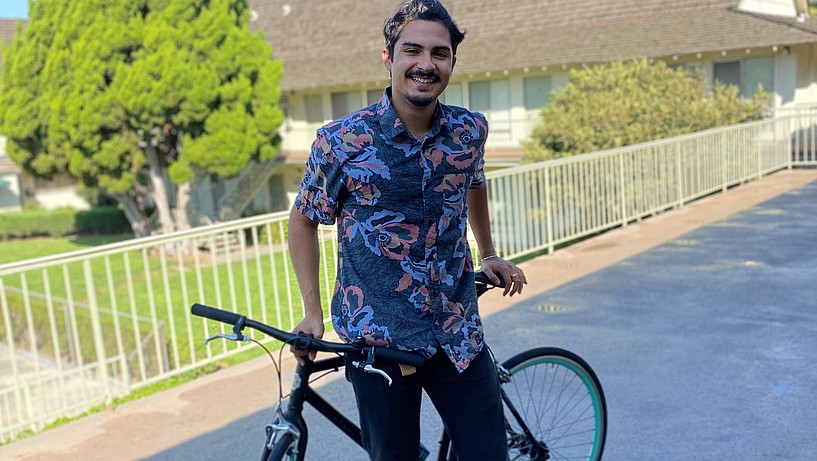 'Hamburg, Germany: a place I had never heard of until my fall semester 2019, until my screenwriting professor announced that film students could study abroad there. Up until this point, I had only heard of exchange programmes through TV shows and movies, promising fantastical adventures in another country, but it never interested me very much. This opportunity, however, felt different. I felt a tug at my stomach that told me I might find myself regretting passing up on an opportunity as grand as this, so I applied, was accepted and before I knew it, I was off to shoot my shot.

HAW Hamburg’s welcome week introduced its new exchange students to the city and to each other. It was here that I met a group of people from countries as far afield as Australia to Finland. We stuck together for the first few weeks before classes began. Normally, all classes have a set weekly schedule with dedicated professors who would email us about assignments and meeting times. Sadly, just as the programme was about to begin, corona struck. CSULB asked all exchange students to return home and I was filled with a mix of sadness and anger. Was all the planning and effort put into this exchange now in vain? I had worked so hard and stressed night after night in order to get to this point. I personally felt that I would rather bite the bullet and bide my time in Germany than risk catching the virus while on a flight home. I emailed my coordinators at CSULB and informed them of my decision, believing it was best to push my luck and rely on the amazing German healthcare that was provided to me.

A bike can save your life

Switching from in-person to online classes took a couple of weeks. Time felt ambiguous and I kept myself busy by re-reading books I had brought from home and playing on my Nintendo Switch. That was when I told myself that I needed to change something. I knew the monotony of staying in my room would be a complete waste of my time in a country as beautiful as Germany. I figured that I had extra funds I could use to splurge on something useful and decided to buy a bike. Riding away from the shop on a brand-new city bike felt like a step in the right direction towards making the most of my semester. I would be able to get around the city while also respecting social distancing. It was my one-way ticket to getting a fuller experience of the beauty that Hamburg has to offer. During the semester I would often take bike rides that lasted all evening. They were my saving grace. Four to five hours would be reserved for biking to Blankenese, one of my favorite locations in Hamburg. I had heard about it in a passing conversation while I cooked dinner one night with my floormates. Curious, the next day I found a bike path and made the hour-long trip down to the beautiful beach next to the harbor.

In Hamburg all the classes were project-based. My routine would consist of checking in on certain dates in order to add to the projects and be instructed on the next step. Much of what I was learning in Hamburg was material I was already familiar with. At the same time, however, I also had classes which had a more technical focus, which was new for me. Thomas Görne’s Sound Design course is the best example of this, as he delved into the mechanics of sound programmes and the philosophy of sonic spaces. His projects often consisted of us adding sound to scenes and explaining how they add to the significance of a sonic space.

One of the standout courses I took while abroad was the Short Cut course. I was in a group of students where our task was to throw around short story ideas that could then be put into pre-production and eventually filmed on set on campus. We met weekly for this class and eventually settled on a short story by a student named Matias. He asked me to revise his script and through this process we became good friends. After pitching the final script to my group, our professor began to appoint team roles. She asked who the group would like to appoint as director, and almost unanimously, my group asked me. Flattered, I accepted and began storyboarding how the short film would be shot on the day we would all arrive on set. Because amazingly, in mid-May Hamburg started to open up again and towards the end of the semester we were allowed to be on campus in the production lab, working together, while respecting corona guidelines.

Our pre-production was extensive, and we had a proper floor plan that allowed us to work quickly from the moment we set foot in the production lab. Everybody on set wore masks and made sure to wash their hands regularly. When the set was dressed, we threw up lights and immediately started rolling. Filming in the production lab was reminiscent of the first few times I helped other people back in California. Thankfully, I had been on enough sets to know how to professionally move projects in a timely manner. Directing my own group made me both nervous and excited, as ultimately, I had the choice in how an image would look, but I also needed to accommodate myself to any and all situations on set. Wrapping up on this project felt great. This was the first time on my exchange where my studies involved anything in person and it made me crave more, but out of respect for the conditions we were under, I knew I had to temper myself.

A few weeks after this project, all my other courses began to pick up and assign large projects that would mark my final grade. This part was the most stressful, but that’s to be expected near the end of the semester. In total, I would be assigned two audio projects, three short films that I edited myself, and a few papers. The difference between CSULB’s courses and HAW’s courses is that you are not constantly being barraged by assignments that involve typing together analysis of films, documents, and other miscellaneous things my American professors may want that week. I much prefer the timed approach of German film projects where ample time is given to complete all assignments.

The semester wasn’t all work though. During the first few weeks in Hamburg, I made my best attempt to socialise with everybody on my floor of my student dorm. One of my first acquaintances was Jana from Spain. We clicked because we both spoke fluent Spanish and liked comparing the different aspects of our cultures. I still had my group of friends from the welcome week, but the majority of the group sadly ended up returning home. Gradually, over the semester only three of us would remain. It wouldn’t be too long, however, before I met a French student, Oriane. We spoke one night while taking out the trash, and then another night while eating dinner. Then one morning we decided to walk around the park a bit to get some air. It was then that I realised that despite our completely different upbringings, we clicked on many levels. A leisurely stroll eventually turned into a four-hour conversation ranging from hot air balloons to the political climate of the United States. She introduced me to her group of friends and they became the people I would spend the rest of my exchange with. We were able to go on picnics and make the most of Hamburg social life when that became possible again in the summer. In July I even got to visit Oriane’s family in France. When most people think of France, they often think of Paris and its bustling streets and extravagant nightlife. While that’s completely true, France is so much more than just the Eiffel Tower. It is castles, forests, rivers, and beautiful fields of sunflowers. With Oriane by my side, I was no longer just an American tourist in Europe. She made me feel like I was part of her culture.

Wrapping up the semester, I was greatly tested when I needed to film a short over an entire weekend with the final cut due at the start of the week. Without hesitation, I pulled up a short script that I had put together at the beginning of the semester and rented equipment from the production lab. I was fortunate enough to be able to cast my fellow exchange student, Hunter Uman, as my main character and borrow another exchange student’s apartment for the actual filming of the project. With the entire project being completed on such short notice, it was all done in a gung-ho guerrilla-type shooting manner. That means: no tripods, no pre-planning, all done in the moment. Surprisingly this effort resulted in a rather proper short clip that demonstrated my ability to screen write a short conversation between three characters with conflicting interests, while also subtly revealing how their characters might interfere with each other in the future. Given it was just a sample clip, as I could film only one scene, it worked to serve as a proof of concept. Prof. Willaschek was pleased with my work, as was I – also of my whole semester in Hamburg. My cumulative grade for all my courses averaged at 1.3. (equivalent to "A-" US grading system).'