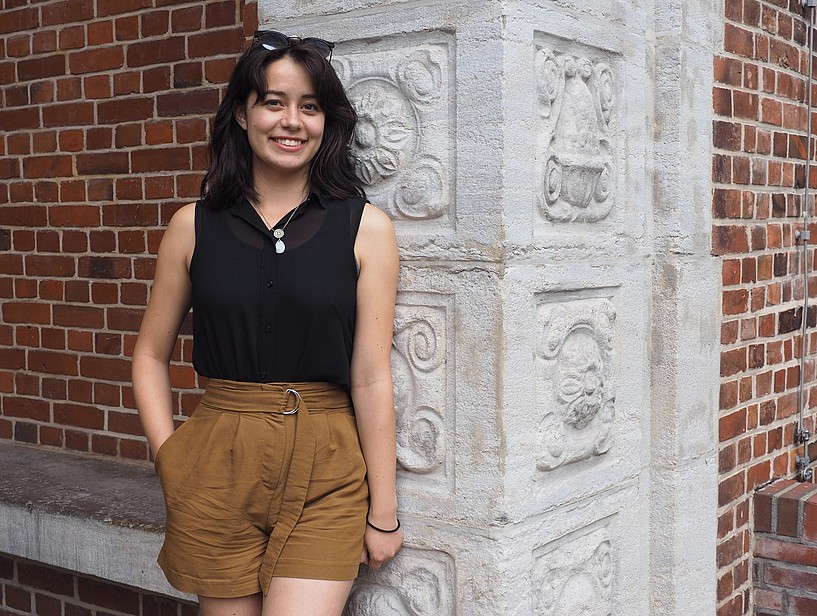 I wanted to bring my work out of a bubble, be a fish out of water and see what other people are like in their art.

From the US to Germany

At the beginning of her junior year Blair started thinking about study abroad. She was interested in European history and really wanted to travel. 'I wanted to bring my work out of a bubble, be a fish out of water and see what other people are like in their art.' When it came to options MICA was very clear. 'I talked to the MICA Education Abroad Office and asked where the best place to go for illustration was, and they said Hamburg.' Blair’s sister was learning German and a friend had been to Germany and had really loved it, so Blair signed up. She started learning German in self-study, read up a bit on Germany and took a summer class about native and American identity so that she knew a bit more about her own country.

From stranger to local

Blair’s first impressions of Hamburg and Germany were mixed. She found the people friendly and was especially impressed by her buddy, Anne, who picked her up at the airport. There was an instant connection and warmth. But at the same time things felt abstract and raw. 'I felt bad not knowing enough German. Everyone speaks English but I wanted to connect with people in their own language,' she explains. 'It reminded me of when I was small, before I was able to read, and seeing signs and letters and not knowing what they meant and being upset that I couldn’t be part of that world.'

But as the first weeks passed she spent more time in the city, getting to know her classmates and making friends with people in her student apartment and with other exchange students. 'I felt more and more at home as I learned to navigate the city, and I made some very close friends that I am really going to miss when I go back,' she says. 'Hamburg is a beautiful city and the different neighbourhoods impacted me in different ways. They were enriching but familiar at the same time. And there are so many things to do in Hamburg. I went to different things like swing dancing classes, to a jazz club on a boat or to the long night of the museums. It is really easy to connect with people who are interested in the same things as you are.'

From book illustration to game design

Blair sees lots of similarities between MICA and HAW Hamburg, whether it is the way the classes are taught with a focus on critique or the way the students interact with and support each other. 'My classmates were very warm and looking at their work was really inspiring,' she says. 'As soon as I got into class it was a familiar world; free and anchoring at the same time. I felt really at home.'  She took Book Illustration with Professor Bernd Mölck-Tassel and Interactive Illustration and Games with Professor Mareike Ottrand, both 15 ECTS credit classes.

One project in Book Illustration was to illustrate the cover of a travel catalogue for a company specialising in family travel. 'Bernd is an amazing professor! He sees the potential in your work and encourages you to run with it. He doesn’t want to change you but helps you to succeed with your own style.'

In her Illustration and Games class the project was to develop a platformer game. The visual side looked at concept art, animation work and character design, while the technical side introduced her to the Unity programme. 'Before there was a kind of disconnect for me between the visual and the technical,' she explains. 'But slowly but surely it revealed itself to me. To be able to put the two together was mind-blowing. It was magical to test other people’s games and to see how things gelled.' In Professor Ottrand she found a role model and someone to aspire to. 'Mareike is really cool and very encouraging. She has so much knowledge about games, and it brought our work forward to be able to discuss the industry and social developments. In general you feel the teachers are here because they are passionate about their craft and genuinely want to share it with you.'

From beginning to end

At the end of her semester in Hamburg does she feel that the study-abroad experience has changed her? 'I feel I can experiment much more with other styles and try new things. I branched out quite a lot in Hamburg. I thought I was past that point back home, where I was surrounded by my usual work, self-imposed rules and environment. I think a lot of students can get into that box and study abroad certainly helped me get out of it.'

Thinking about the final weeks and the run up to the finals and end-of-year exhibition, her face lights up and she laughs out loud as she remembers the twists and turns and turmoil of the final preparations and how everyone pulled together and brought each other through. 'My classmates were fun, even hilarious at times. We were pouring our hearts into our work, throwing things across a crevasse and hoping they would get to the other side. Seeing us all come through at the end was really satisfying.'

So, it sounds like she would recommend study abroad for other art students at MICA. 'Definitely!' she says, smiling. 'I improved not just as an artist but also as a person. Studying in Hamburg allowed me to get more of an idea of Heimat, the home you make. To be somewhere else, to be around different people and cultures is really and truly enriching. I still feel I am growing. I thought I had expanded in college but this has made a world of a difference.'

Studying in Hamburg allowed me to get more of an idea of Heimat, the home you make.