Nacha Vollenweider from Argentina completed her Master's degree at HAW Hamburg in 2016. Today she is a freelance artist with a specialisation in comics. In times of corona we wanted to know what she was up to. 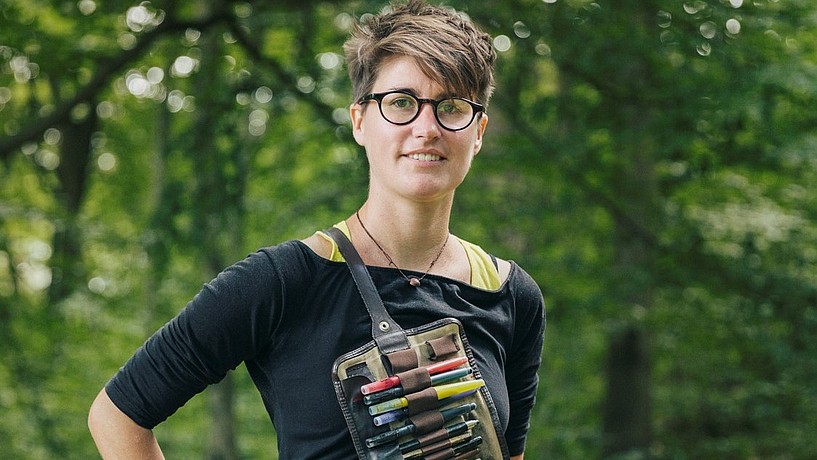 In 2013 Nacha Vollenweider came from Argentina to HAW Hamburg with an artist's grant from the German Academic Exchange Service (DAAD) for one year to realise a comic project with Professor Anke Feuchtenberger. Afterwards she completed a Master's degree with us and with her Master's thesis 'Footnotes' about her experiences in Germany, she was one of 10 finalists for the Comic Book Prize of the Berthold Leibinger Foundation in 2016. Today she is back in her hometown of Córdoba and works as a freelance artist and comic illustrator; for 60 days now she has been working on a free art project which she calls "Robins@on Project".

'It is a project that was developed within the framework of the "Aislamiento Social, Preventivo y Obligatorio", the strict quarantine in Argentina. The loneliness, the isolation, the lack of perspective, the disorientation led to the question of a way, an exit from this labyrinth of despair. I asked myself some questions: Will the post-corona world be the same as the world we know? Are changes possible? Is there an exit from the labyrinth and if so, where is it? How do we imagine the future and what role does art play in this context? To find an answer to these questions, I made a drawing every day and mounted posters all over the house. The result was a 40-page comic: the "Quarantine Report "*. The house was staged as an island in this concrete jungle, the only possible shield against chaos and insecurity (symbolised by the sea).

At my home university, the Universidad Nacional de Córdoba, I first studied painting, but then I discovered comics. I got to know Professor Birgit Weyhe and the comic scene in Germany through a workshop at the Goethe Institute in Córdoba. That was the beginning of my relationship with Germany. In my Master's degree my major was  illustration with a focus on comics. The medium comic offers numerous possibilities in terms of styles and themes. I find it exciting to create reports, biographies and comic essays, because you can research and write about current topics. It was great working with Anke Feuchtenberger and Birgit Weyhe. They are well-known comic artists and I learned a lot from them.

I lived in Germany for a total of six years – after my Master's degree as a freelance illustrator until August 2018. The most important thing for me during this time was integration, cultural exchange and the opportunity to learn a new language. This opened many doors for me and I made many new friends. Although I have been back in Argentina now for two years, I am still closely connected to Germany.

After such a long time in Hamburg, it was also not easy to find myself back home. It took a while until I could finally get a foothold again. For artists and freelance illustrators the situation here is difficult; so I took part in lots of exhibitions, offered my own workshops and am still in contact with the DAAD and the Goethe Institute. At the moment I am also working on a project called "Back at home". It's a new graphic novel and is about my return to Argentina. Fortunately, with this project I was again selected as one of the 10 finalists of the Comic Book Prize of the Berthold Leibinger Foundation. This year there were a total of 80 participants from Germany, Austria, Switzerland and Argentina.

During my studies at HAW Hamburg I was able to develop my own style, an identity for my work. That is very important with the huge variety of styles. Through the small groups I learned a lot in class. It was great to exchange ideas and we learned a lot from each other. Studying abroad is not only about language skills, but also about teamwork, planning tasks in terms of time and content, and taking on board questions and opinions from others. This increases the willingness and courage to adapt to new and unfamiliar situations. And above all, you develop intercultural skills. That is very important!'