Leonardo Patrick Ibrahim of Indonesia has always been keen on technology, especially cars. His father also studied automotive engineering in Germany because it is well known for its auto industry. 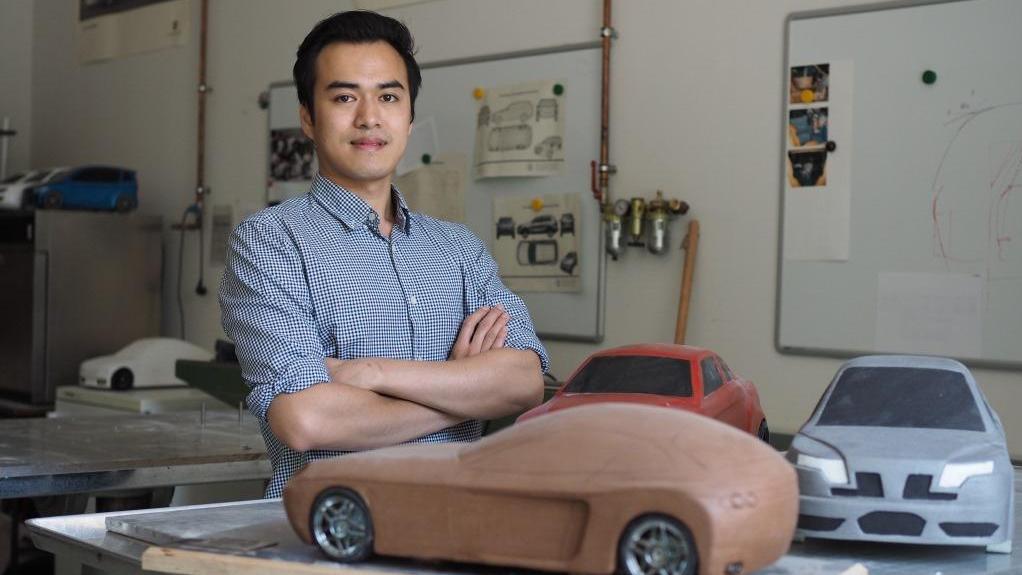 Leonardo Patrick Ibrahim is 26 years old and comes from Semarang, Indonesia. He is in the final semester of his Automotive Engineering Master's degree at HAW Hamburg. At the moment he's completing his Master's thesis at the Fraunhofer Institute in Halle. We wanted to know how everything began and how he is faring in Germany and in his studies.

'My father also studied automotive engineering in Germany, at the university of applied sciences in Cologne, and he recommended that I study in Germany,' Leonardo explains. 'I've always been interested in technology, especially cars, and Germany is very well known for its cars. The Germans build the best cars in the world.'

The Studienkolleg – the beginning

In order to get ready, he started learning German in Indonesia and then came to Hamburg at the end of 2008 to spend a year at the Studienkolleg, a programme that prepares international students for study at a German university. 'I had to take the Feststellungsprüfung [assessment exam] in order to be able to study in Germany,' he says. 'I picked Hamburg because I knew people here.' That was also one of the reasons he decided to study at HAW Hamburg. The technical university in Kaiserslautern had also offered him a place, but through the Studienkolleg he'd already established a circle of friends in Hamburg, which he didn't want to give up. His sister had also studied mechanical engineering at HAW Hamburg and this family connection was important to him.

At the Studienkolleg, he took the so-called T Course, which offers courses in math, chemistry, physics, German and English. 'The Studienkolleg prepared me well for my studies,' he says. 'I learned a lot of specialised terminology and improved my German.' Still, the beginning of his degree was difficult. He had to work hard and review the material after his lectures in order to understand it. He got support from a study group that he set up together with other students. 'We helped one another. I was good at math, and other students had more experience in practical subjects like materials science and machine components, which they taught me.'

In the fourth semester of his degree course, Leonardo chose the 'Drive System and Chassis' study specialisation. 'I'm interested in subjects like thermodynamics and I enjoy working with numbers, so it suited me well,' he says. 'The degree at HAW Hamburg is structured really well. I didn't have as much practical experience as the other students, but the subjects are built up bit by bit, so it's possible to understand them easily.' He also found the professors very helpful, especially his favourite, Professor Hanno Imme-Schramm, who teaches the courses on combustion engines. 'He is in close contact with the students and gives them a lot of good tips, about the lecture materials and about life,' says Leonardo. 'And he has a lot of experience in the industry. He used to work in the Otto engine development department at Volkswagen. Even today he still has a good network, so he knows about the newest developments.'

As part of his Bachelor's degree, Leonardo completed a one-semester internship at Deutz AG. There he was able to further develop his knowledge about engines and gain practical experience at the engine test bench. 'I was able to apply what I'd learned in the lectures,' he says. 'But I saw that I have to bring more with me than what I've learned at university. You have to bring your own ideas to the work.' The beginning was difficult here too, because Leonardo didn't have any work experience at that point. But his colleagues were very helpful and explained the software and the processes. 'The main thing I learned was how to work through problems and find solutions as a result.'

The Master's degree course is even more practice-oriented than the Bachelor's degree. There are lots of examples from industry, and we do a lot of projects and lab courses.

A Master's degree – the learning continues

His internship showed him that he still had a lot to learn. So he applied for a Master's degree course at HAW Hamburg and was accepted. 'The Master's degree course is even more practice-oriented than the Bachelor's degree. There are lots of examples from industry, and we do a lot of projects and lab courses,' he says. One project was especially formative. 'We had a MATLAB project and I was really excited to learn how it's possible to use software to solve a technical problem. I saw how this software is used in many areas of engineering.' For this reason, he decided to focus on this topic in his Master's thesis and applied for a position at the Fraunhofer Institute in Halle. For reasons of confidentiality he can't say much about the project he is currently working on, except that he has to model and simulate different operating scenarios in the area of renewable energies in order to develop algorithms. 'The Master's course "Alternative fuels and propulsion systems" really helped me familiarise myself with the topic,' he says.

During his Master's studies Leonardo worked in a student position at BeNEX in Hamburg and was thus able to pay for his studies. At the Hochbahn subsidiary he developed algorithms to automatically assess vehicles' energy consumption using Visual Basic for Applications. 'I worked 20 hours per week and was paid well,' he says. 'Above all, though, I was able to gain important experience for my degree and my thesis.' Leonardo also benefited from another source of funding during his Bachelor's degree. In the 2011/2012 winter semester he successfully applied for an achievement-based scholarship from HAW Hamburg. Motivated by this €2,000 in funding, he continued to perform very well during his Bachelor's and Master's studies and received six scholarships totalling €10,400. His current grade point average is 1.51 – a remarkable achievement, and not just for an international student.

Reading all of the above might make one think that Leonardo only cares about his studies, but we also learned about another side of him. As a 'buddy' in the International Office's weBuddy programme, he helps new international students get oriented in Hamburg and at the university and understand how everything is organised. 'When I started out in Hamburg lots of people helped me. I was very grateful, because it's not that easy when you're an outsider,' he explains. 'That's why I wanted to help other people.' He has also worked as a math tutor, and when courses aren't in session he accompanies Chinese students on outings and company visits as part of a summer school run by the German Academic Exchange Service (DAAD).

Leonardo aims to be finished with his Master's thesis in the fall and plans to look for a job in Germany for the time being. 'Germany offers so many possibilities and is very innovative. In Indonesia I don't have the opportunity to work in the automotive industry,' he says. 'I want to gain more experience in software development and use this knowledge to contribute to the development of German technology.'

We wish him all the best for graduation and his future endeavours.