It’s Friday evening and at the same time it is Friday morning. It is 6:30 pm in Hamburg, Germany, and already dark outside. In Long Beach, USA, it is 9:30 am and the Californian sun is shining. On a laptop screen you can see 25 faces the size of large postage stamps. Wolfgang Willaschek, dramaturgy professor at HAW Hamburg, and Kent Hayward, film professor at California State University, Long Beach (CSULB), are joined through ZOOM with their students for the kick-off meeting of a university experiment: a joint three-day virtual film workshop led by acclaimed artists and filmmakers Cassis B. Staudt (Germany) and Patrick Scott (USA). 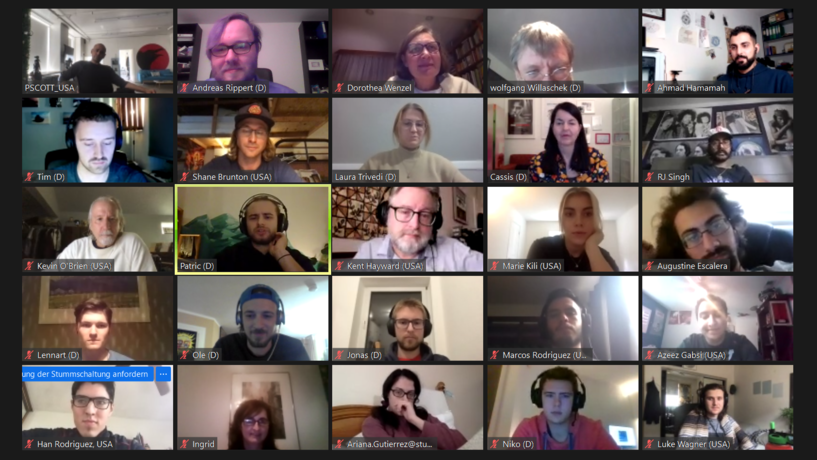 Since 2014, professors and lecturers at HAW Hamburg and CSULB have worked with student teams in Long Beach and Hamburg to share their expertise in directing, screenwriting, dramaturgy, virtual reality and sound design. A joint student project in 2018 resulted in the short film 'Oceans Across'. At the beginning of 2020, plans were in place for a new round of workshops, when corona struck and everything came to an abrupt halt. It looked like there would be no exchange or collaboration. But as the world learned to work together virtually, a new idea was born – a joint online workshop across the Atlantic Ocean. Stories, visuals and sounds were to be created in between inspiring lectures and talks about the guest filmmakers' personal journeys, professional work, and guidance for the future. All in one weekend.

For Wolfgang Willaschek it was a new approach: 'In some way it is totally crazy. For eight months now, universities around the world have been talking about nothing else but the challenge of finding a way between online and in-person teaching, as if it were some formula to solve. You cannot replace close proximity with digital distance, but you can bring people together who would not otherwise meet. They can collaborate by looking through the keyhole of the digital medium into the distance with a view into intimacy and inner life bringing them closer. In the past we have had different workshop formats, but never student teams on different sides of the Atlantic. What a challenge! What an appeal!'

At the kick-off meeting on Friday evening, nine students from CSULB and eight students from HAW Hamburg were put into German-American teams. After a short introduction, Cassis and Patrick set the challenge: The students were to use their own stories to describe their personal 'hero's journey' on the path to achieving their dreams. Using four questions* and five minutes to record each answer. Each team would then edit another team’s stories and the results would in turn become the narrative of one short film. The students were also tasked with portraying the visual metaphor of a character with a torch overcoming an obstacle. Visualisation and sound had to be DIY and from scratch. The teams were not allowed to use animation programmes or prefabricated sounds, but could only use what they had to hand in their corona-enforced immediate surroundings. The teams would work until 2 am German time and then start again the next day at 12 noon, in order to maximise the joint time together, due to the time difference between Hamburg and Long Beach.

Three days later, Kent and Wolfgang welcome their film students and a larger audience of faculty and students for the final presentation on ZOOM. Everyone is excited to see what the students have achieved in such a short period of time and to hear about their experiences. From the students the general feeling is one of exhaustion but also elation at all the things they had experienced. ‘The weekend was a total rollercoaster,’ says Shane Brunton from CSULB and self-proclaimed die-hard film enthusiast. 'I was really nervous about whether I would be able to contribute, but we were a fun and strong group and we carried each other through. I really enjoyed the editing and finding the story within.’

Luke Wagner from CSULB was given the job of turning the individual videos into one short film. ‘It was really challenging. I had to whittle 20 minutes of material down to eight minutes and tell a story. The focus was to capture what I felt was emotionally poignant.’ The material was then passed on to Ole Christiansen, Patric Pappenberg and Tim Passgang in Hamburg, who were responsible for sound and post-production. The soundtrack had to match the DIY approach of the visualisation. ‘I had four hours to come up with new sounds. That would usually take me three days,’ Ole admits, laughing. ‘I went out and recorded horses in the fields behind my house. I was really pleased to capture that snorting noise they make. That is hard to get.’ 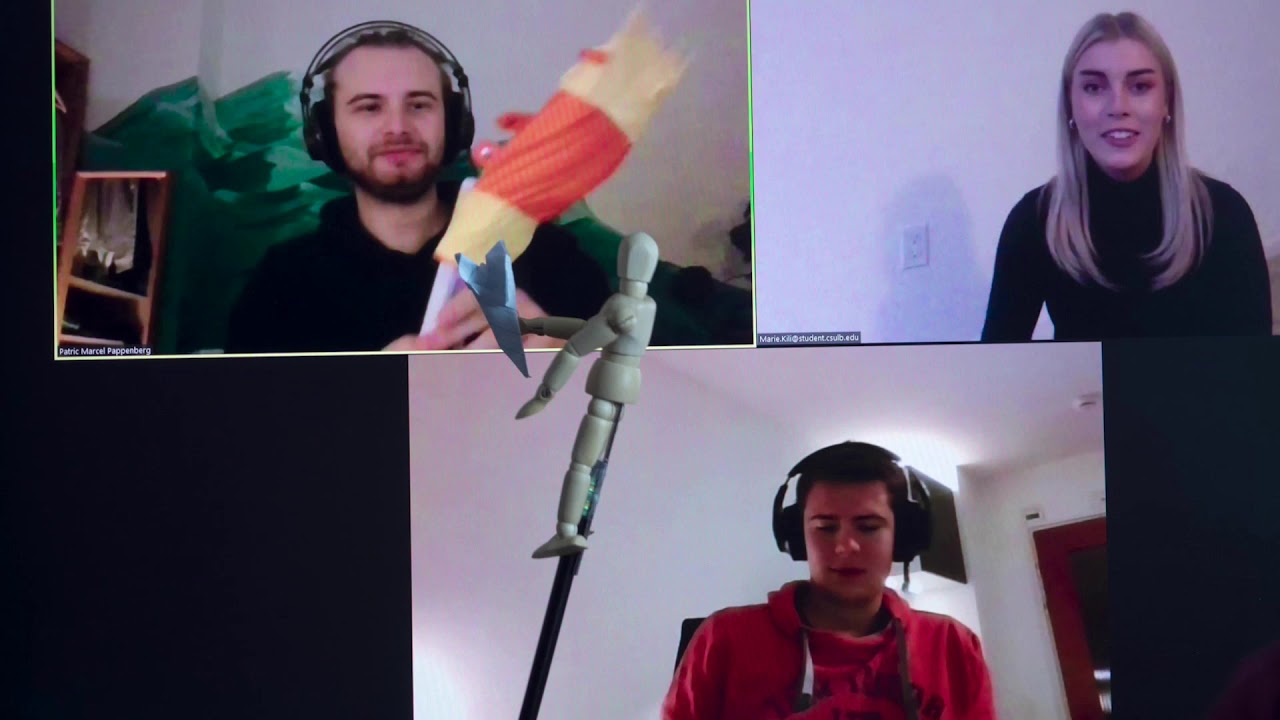 Please note that turning on the video will result in the transmission of data to the third-party provider.

When they started planning the workshop both Wolfgang and Kent knew that the online format was a big risk with lots of obstacles to overcome. So, they were both thrilled with the result. ‘The film is a very moving, heart-felt document of the student's struggles in a pandemic, and in life. It feels and looks homemade, which only adds to its sincerity.’ Kent describes his first impression. ‘This is one of those situations where the product is really hard to separate from the process. Both were important and successful in different ways. Ultimately, the biggest success is the collaboration, the breaking down of international barriers, but also the breaking down of personal barriers that inhibit us from trying new things, meeting new people, from taking chances and possibly looking foolish.’ And relationships were not just formed across the Atlantic. CSULB student Luke spoke for many when he said: ‘I got to meet some really great people – also from Long Beach. Now I know other creative people from my own school, who share the same passion.’

During the kick-off meeting, Patrick Scott, or PScott, as he prefers to be called, told the students what to expect of the workshop: ‘Strange challenges will be thrown at you. They are there to help you work the muscles you will need for filmmaking. It is all about empowering you. It is your job as the artist, no matter what the circumstances, to develop your style.’ Reflecting on their experience with the students, both Cassis and Patrick felt that that goal had been achieved. ‘We wanted to create a workshop that would help put the students on their path to professional and creative independence. Throughout every stage we repeated the truism that the students should "trust the process”. This is a core philosophy of both of our careers as artists. It's ironic then that we were both surprised by how salient this philosophy was for the workshop. It goes to show that no matter how many years one works in a craft, one can always be amazed and moved by the enduring power of collaboration.’

Aside from the creative and technical learning aspects of the workshop, the students were especially thrilled to hear about the personal experiences, which Cassis and Patrick shared with them. ‘We talked about film-making in the evenings and I wasn’t expecting that. That was really interesting,’ says Ole. ‘I should have been at CSULB this semester as part of the exchange programme, but I couldn’t go because of corona. So, this has been a great way of connecting with Long Beach in a different way.’ For many the workshop also offered personal growth. For Ahmad Hamamah from HAW Hamburg it was about teamwork: 'The workshop was a real eye-opener. I love telling stories and usually work on my own. The workshop has shown me that I can work in a team.’ For Ariana Gutierrez from CSULB it was about leaving her comfort zone. She admitted at the kick-off meeting that she is a very shy person and saw the workshop as an opportunity to push herself. On Monday evening she told the group: ‘I found the last three days very challenging and there were lots of things I wasn’t comfortable with. But I learned a lot and got so many wise words for the future. I would really like to do it again.’

Thanks: This joint virtual workshop would not have been possible without the extremely hard work and support of Andreas Rippert and Martina Hentig, academic assistants at the Media Technology Production Lab at the HAW Hamburg Campus Finkenau. We are extremely grateful.

The university cooperation is an important part of the 'HAW goes USA' strategy. Since 2017 the film exchange between HAW Hamburg and CSULB has been recognised by the German Academic Exchange Service (DAAD) as a strategic partnership. HAW Hamburg receives ISAP-funding for scholarships and travel grants: www.daad.de/isap This workshop was made possible by this funding.

* Workshop challenge questions: Each student would ask another student one of the following questions: 1. When you chose a path as a creative person, what did you want from it? 2. If you could tell your younger self something about what to expect, what would you tell them? 3. The future is full of uncertainties, but what can you be sure your future will hold? 4. What was the most difficult time or most difficult decision in your life and why?

Cassis B. Staudt (www.cassisb.com)
Composer and artist Cassis B. Staudt studied music in Hamburg and at the Juilliard University in New York City. Working for director Jim Jarmusch, she won a Golden Palm at the Cannes International Film Festival as one of the producers of the Iggy Pop and Tom Waits segment 'Coffee and Cigarettes'. In 2004 one of her ideas led to the Oscar-nominated film 'Ferry Tales', whose theme song she composed.

Patrick Scott (www.zoochosis.com)
Known for his successful viral videos, Patrick Scott received his Bachelor’s and Master’s degrees in film production from California Institute of the Arts. As a commercial director his clients have included HBO, National Geographic and Warner Brothers. Scott’s films have been showcased in film festivals around the world, including the Sundance Film Festival.