Apurva Shrivastava, Master student from India, appreciates the close contacts to industry that her HAW Hamburg professors bring with them and feels she has acquired a very good understanding of the bioprocessing industry in particular. 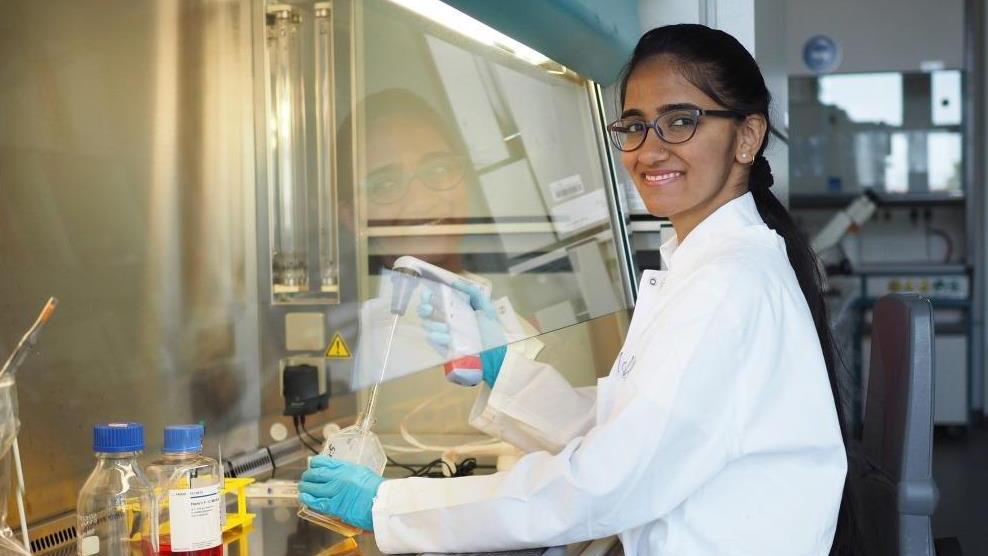 'Unique or like none other' – what a wonderful gift from parents to their child. This is the meaning of Apurva, the first name of the 23 year old graduate student I am interviewing today. Apurva Shrivastava is studying in the Master’s programme 'Pharmaceutical Biotechnology' at the HAW Hamburg Campus for Life Sciences in Bergedorf and is enjoying a well-deserved break after a hard semester of studying. The campus buildings and labs are practically deserted and we have the sunny terrace, where students usually relax in the lecture breaks, to ourselves.

The path to a Master’s degree can be stony

I know Apurva as one of our scholarship students; an opportunity she was awarded because of her excellent grades in her first semester at the HAW Hamburg, so I am curious to hear more of her story. Born in Hyderabad, India, Apurva also spent seven years of her childhood in Chennai and finished her high school education in Nashik. Her father is a chemical engineer and had to move frequently for his work, so the close-knit family moved with him. They returned to Hyderabad, where Apurva completed her Bachelor of Technology in Biotechnology at the Jawaharlal Nehru Technological University in 2015.

It was during her Bachelor’s programme that the desire developed to focus on research and do a Master’s degree. But things didn’t quite go as planned for the ambitious student. 'I applied to several universities and didn’t get a single offer', she says, 'This really made me question my ability to pursue a Master’s and it threw me into a period of depression.' The usually gregarious student became withdrawn and she spent the next four months reading and thinking about things. She talks about this because it has been an important lesson for her in many ways. 'I realised that when I initially applied for Master’s programmes I wasn’t mentally ready. I reread the statement of purpose I had written for my university applications and it was clear to me that it did not reflect the maturity needed for the challenge of a Master’s degree', she admits honestly.

And so she prepared. Through her professors she heard about the opportunity to work as a project fellow at the Institute of Genetics at the Osmania University in Hyderabad. She applied and worked for six months on a research project on the association of gene polymorphism with recurrent abortion in the South Indian population. It was during this time that she met Prof. Dr Deepika M.L.N. 'She was a wonderful teacher. She helped me understand how research works and how to manage time and material', she says. 'She was very strict with me, but at the same time she taught me to take on responsibility. She wanted results and believed I could do that'.

A Master’s degree at the HAW Hamburg

When it came to reapplying for Master’s programmes, Apurva now had a much better idea of what she was interested in, where her strengths lay and why she wanted to do a Master’s degree. 'From one bad experience comes a lot of knowledge', she reflects. The question was whether to study in India or in Europe – and fate played a small role in that decision. Her father was working for a company whose headquarters are in Bremen, so he used his connections to find out about studying in Germany. His boss assured him that Germany was a very good place for higher education and that he would support Apurva in every way possible. So the decision was made and Apurva applied to several universities and got four offers. 'The HAW Hamburg was the last university to offer me a place and in my mind I really wanted to go to Hamburg, so it was a very nail-biting time', she remembers.

Even though the Master’s programme is in English, Apurva needed A2 German to enrol, so she took German classes in India and was at level B1 by the time she arrived in Hamburg. She has been improving her German ever since because she lives with a German family and insists they speak German with her. 'I found the family through the weBuddy programme and they are all really lovely to me. The landlord is like a second father to me. He helped me with all the administration at the beginning and I have really good relationships with everyone'. Speaking German has also helped her get to know other German students and make friends at the university. 'Germans really appreciate it when you try to talk to them in their own language. I find they really open up if you can find things you have in common as ways to connect', she says.

I really appreciate that you can talk to the professors all the time if you need advice and the resources allow you to work independently and even make mistakes.

After two semesters at the HAW Hamburg Apurva is confident she made the right decision and is very clear why. 'There is no hand-holding at the HAW. At the beginning I often felt totally left in the dark, but it has shown me that there is a ‘brain in my head’ and that I am capable of doing this programme', she describes her first weeks. 'I really appreciate that you can talk to the professors all the time if you need advice and the resources allow you to work independently and even make mistakes.' She appreciates the close contacts to industry that the HAW Hamburg professors bring with them and feels she has acquired a very good understanding of the bioprocessing industry in particular. 'They give you the whole story and an insight into the practical aspects of industry. They make you think about what steps you need to take in your research projects and you have to work really hard.'

A Master’s thesis in genetics

Apurva’s passion is for molecular biology and so it was clear that was the area where she would do her thesis. The HAW Hamburg offers a regular research seminar where external researchers give lectures about their projects. It was in this seminar that Apurva met Prof. Dr. rer. nat. Tanja Zeller, professor for Genomics & Systems Biology at the University Hospital in Eppendorf (UKE). 'As soon as I heard about her work, I knew that was where I wanted to do my Master’s thesis', Apurva remembers. 'I spoke to her afterwards and told her about my experience in research in India and she told me to apply'. In October Apurva will be starting her research in the EU-funded project in the field of molecular cardiology, looking at transcriptome analysis for the characterization of genetic variants and gene expression in cardiovascular diseases. 'I really like that the research is in a hospital environment and is immediately translated into patient care'.

Finding mentors to guide you

Looking back at her 20 year old self and the paths she has taken, she can see how far she has come and that there have been different people along the way, who have encouraged and guided her. 'My father’s opinion is the most important to me. He knows me best and always says you have to be in the field where your passion lies'. Professor Dr Krishnam Raju was an excellent mentor during her Bachelor’s degree, encouraging Apurva to go to conferences and develop her knowledge further. 'He knew me from year one and he always believed in me'. And Professor M.L.N. was probably the most important; laying the groundwork for a future in research and the confidence to believe it is possible. At the HAW Hamburg it is Professor Dr. Oliver Ullrich, who has been her main support. 'Professor Ullrich has taught me cell culture techniques, has supervised my Master’s research project and will be my mentor for the Master’s thesis. He always gives specific examples as to what you should expect while conducting research and his presentations and lectures are so clear and beautifully connected to other areas, that it has helped me understand the subject better'.

As a Bachelor graduate Apurva felt she wasn’t ready for the challenges of a Master’s degree but the confident young woman in front of me tells a different story. After her Master’s thesis her next goal is to do a PhD and become a scientist, so she is preparing to continue to work very hard next semester to get, as she says, not just good marks but knowledge. Her motivational quote is: 'Once your goal is set, the only thing standing between you and your goal is time'.

Apurva, it was wonderful talking to you and we wish you all the best for your Master’s thesis.