I love the combination of electrical engineering and computer science in the information engineering programme. By combining both of these areas you are maximising the potential areas of employment, which is pretty cool. 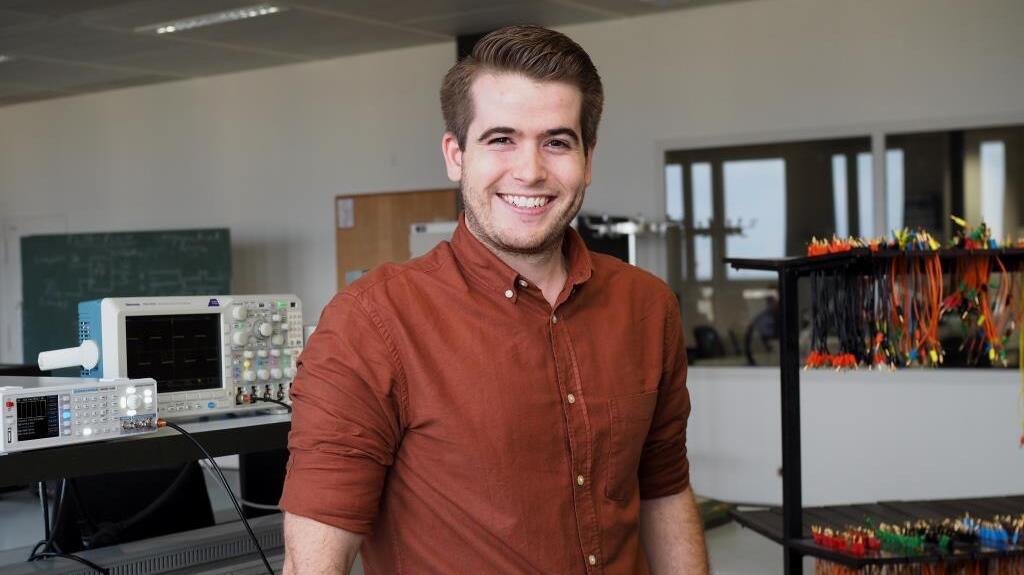 Information Engineering is the most international Bachelor’s programme at the HAW Hamburg. With its classes in English it attracts students from all around the world. We are used to welcoming people from India, Pakistan and Eastern Europe, but last September we met a new freshman, Lachie Townsend, who hails from Australia. To say that not many degree-seeking students at HAW Hamburg come from 'down under' would be an understatement, so we thought we would catch up with him to hear how his first year went.

It’s a miserable day in Hamburg. No sign of the golden October we have had the previous few days and Lachie is understandably not impressed. 'Hamburg is a wonderful city, but the grey drizzle tends to get to me. After all, I come from the sunshine state!', he says, laughing good-humouredly. Which takes us to our first question: How does someone on the other side of the world end up studying in Hamburg? And before we could get excited about how well our social media channels work, Lachie brought us back down to earth: 'I came to Hamburg because of my girlfriend. We met in Australia and when her visa expired, we looked at options to stay together. I was planning to study electrical engineering in Australia, so I started looking in Germany and was very fortunate that there is an electrical engineering degree taught in English at the HAW. It also boggled my mind that international students don’t have to pay tuition fees!'

In September 2018 Lachie started in the Information Engineering programme, where we met him at the official Meet & Greet during the Welcome Week for international students. So, how has the first year been? 'What a year it has been! I don’t know where to begin', he exclaims, laughing, 'It was a lot of work.' The first year consists of foundation courses in mathematics, basic programming and electrical engineering to prepare students for the more specific technical courses that start in year two. Despite the workload, Lachie is very positive: 'We have been very lucky. We had some very passionate professors and that is reflected in our results and our aptitude at the end of the courses. I was particularly impressed by our programming professor, Marc Hensel. He took a bunch of students with no programming skills to the point where they are able to write basic software, which is an impressive task. It was a tough job and he did it really well.'

We are a pretty close-knit cohort and we look out for each other. At the end of the day we all want each other to succeed.

Another important aspect of the first year were the friendships that developed between the students. Lachie has friends from all around the world and they support each other in the daily demands of their studies. 'Getting used to the level of independent study required was a challenge for a lot of people and the hundreds of hours of preparation for the labs often pushed us to the limit. But we are a pretty close-knit cohort and we look out for each other. At the end of the day we all want each other to succeed.'

The hard work in the first year has certainly paid off. Lachie was one of thirty international Bachelor students who were awarded a scholarship for academic excellence by the HAW Hamburg this year. He is looking forward to year two and the more specific technical subjects, even though it contains signals & systems, which many consider the toughest class of the programme. But according to Lachie he has another great professor teaching that: 'Professor Rauscher-Scheibe is a mathematical whizz and has a really deep understanding of the material. She can show us which mathematical elements are important and which are less so. Plus she is just really, bloody lovely!'

What makes Lachie different to many of his peers is his integration into German life. He started taking language classes when he got to Hamburg and has continued to improve his German through his part-time work as a lighting technician at the Hamburg State Opera House. 'Through my girlfriend I am obviously more part of German life, but it’s also a requirement at work that we speak German, so I continue to learn and get more confident every day, though my grammar is still appalling', he admits, laughing. 'It has definitely helped make Hamburg feel more like home.'

When he isn’t studying, Lachie is working at the opera house. 'I study and I work. That is more or less my life at the moment.' But when he has a little free time he likes to spend it outside, in Hamburg’s parks or at the lake. He joined a touch-footy team, which also helped him become more integrated.  'Being in Europe is pretty spectacular. Travel to other countries is just so accessible.' A year ago he admits he would have had a list of at least fifty things that he missed about Australia, but the longer you live somewhere else, the more you get used to it and a place becomes more like home.

The initial culture shock has faded, though there are a few creature comforts that he still misses. And so, it is very likely that Lachie will return to Australia at some point in his career. But he is in no hurry. 'Depending on how my German improves, I might do a Master’s. Ideally, I would like to work in the development of software and hardware for the entertainment industry when I graduate. Maybe continue my freelance work too. I love the combination of electrical engineering and computer science in the information engineering programme. By combining both of these areas you are maximising the potential areas of employment, which is pretty cool.'