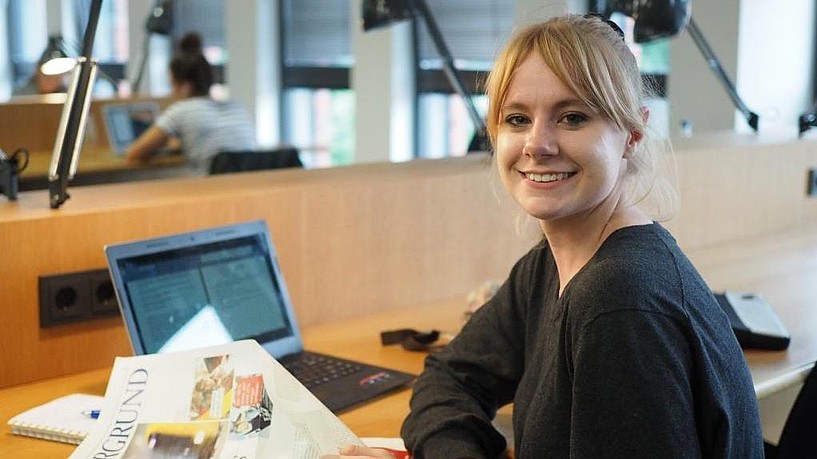 It fits my needs perfectly and I couldn’t be happier with my choice.

So when Emily started looking at study abroad options her focus was obviously on Germany. Deakin University has several German exchange partners, but for Emily Hamburg was the best match. 'It fits my needs perfectly and I couldn’t be happier with my choice.' Emily took five classes in English in the field of digital information and media culture: Digital Culture and Critical Theory, International Communication Systems, Knowledge Organisation, Web Analytics, and Social Media and Innovation. All the classes brought together students from Germany and from around the world, giving an international outlook on each of the topics.

Now at the end of her semester what has her experience been like? 'All the classes are fun and engaging in their own ways and explore areas of study like web analytics and cataloguing that I never experienced before. My favourite class was International Communication Systems (ICS). Before switching to my journalism bachelor, I took international studies for a year and a half, and so the contents of ICS were not only familiar to me but dealt with things that I loved,' she explains. 'I loved the way different parts of the world were compared and analysed, and also how we discussed why the media plays such a big part in how a country is run. It gave me new ideas and models of communication, which in turn helped me reflect on what is happening in Australia.

It is a big step to move to the other side of the world, and not everything went smoothly. The semester had its ups and downs like anywhere, but looking back Emily wouldn’t change a thing. 'Everything led to something great. Once, I missed an opportunity to join some friends on a trip, but I ended up meeting someone else instead, who I've become incredibly close to. Or a missed train led to great conversations with total strangers. Everything led to something and it was all incredibly worth it,' she says, smiling. 'When I first got to Hamburg, I was worried about making friends. Now I realise that I am surrounded by people who I am going to remember forever! At the beginning they were just as worried as me, and now I am part of a group of amazing people.'

In The Economist’s yearly ranking of the 'most liveable cities worldwide', Melbourne has topped the table every year for the last seven years. Hamburg is also in the top ten, and knowing how the people of Hamburg love their city, we can only imagine how hard it must be to leave Melbourne, even for a semester. So, how has life in Hamburg been and how do the two cities compare? 'Hamburg and Melbourne are very similar. They are both people places. They are very welcoming with their own unique vibe. And Hamburg’s summer is like Melbourne’s winter,' she says, laughing. 'Hamburg is modern but old and has a fantastic nightlife. For me it is truly the city of music. There is always something going on, whether it is parties along the Reeperbahn, or church bells ringing. I quickly learned my way around and it has been the perfect place to satisfy my craving for adventure. I feel like Hamburg welcomed me with open arms.'

When you come from a country into which you can fit most of Europe, a semester in Germany quickly becomes a semester of travels. And Emily is no exception. 'Because we are such an isolated country, and it's expensive to fly anywhere, I am taking advantage of every opportunity I can get to travel. During the semester I used some long weekends to go to Budapest, Vienna, Amsterdam and Antwerp as well as cities in Germany like Cologne, Berlin and Potsdam.' But it doesn’t stop there. Once exams are over Emily is off and the list is long: 'I am going on a tour of Italy, then one of Stockholm, Copenhagen and Oslo, and then another of Prague, Brussels, Paris as well as Southern Germany, And that's only what I've planned so far!' she says, laughing. 'I've got a serious case of Wanderlust and have come to love how accessible Europe is. A spontaneous spur-of-the-moment decision can lead to an amazing trip, so who knows where I will have been by the time I leave Germany.'

I feel like I have become braver, wiser, and more open.

Many students think of study abroad as a 'party semester', a bit of fun but nothing to take too seriously. When you talk to Emily you get a very different impression. While she has clearly had a fun semester, it is obvious that she thinks deeply about things and has been reflecting on the experiences of the past five months: 'I feel like it's given me a new perspective of my home. We do things so differently to other countries and we definitely say things differently. This semester has made me reflect on my home and how it makes us unique.'

Being in Hamburg has helped her improve her spoken German, but she has also picked up phrases from different languages by making friends with people from all over the world. 'It has made me realise just how easy it is to step beyond your boundaries and adapt to different situations. I feel that since I have done this, I can do  anything! During my time in Hamburg I have asked myself questions that I had never asked before – and got answers I didn't expect. I feel like I have become braver, wiser, and more open. I feel like a newer version of myself.'

So, to her fellow Australians she’d say: 'Study abroad? – go for it!  It is in our nature to rise to challenges, so don’t be afraid. The world is your playground. Try new things, step outside your boundaries. When you study abroad you will make friends, find things you love and create memories that will last forever. I always knew that I would not return to Australia the same person as when I left, and thankfully, I love this new me!' she says, smiling.