Despite the worldwide lockdowns as a result of the coronavirus, 49 students of Shanghai-Hamburg College (SHC) were awarded their joint Bachelor degrees from HAW Hamburg and the University of Shanghai for Science and Technology (USST) on 3 July 2020. 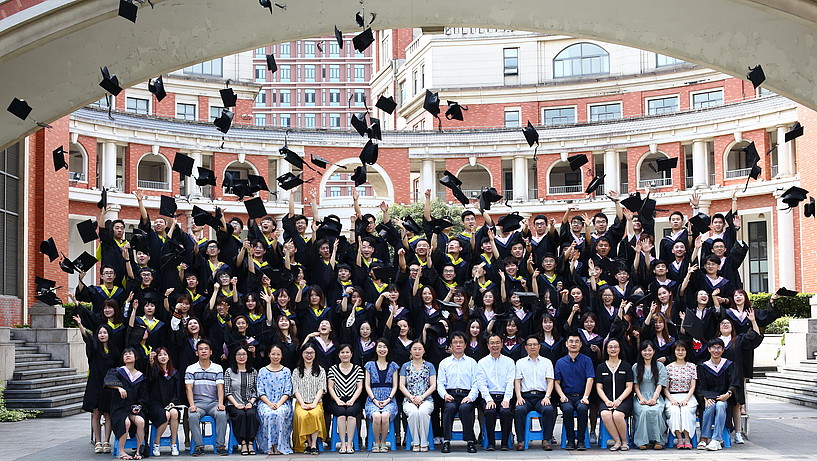 Class of 2020 at Shanghai-Hamburg College.

During a festive graduation ceremony, this year’s graduates in the degree courses Mechanical Engineering (manufacturing technology) with TestDaF and Foreign Trade/International Management with TestDaF were awarded their Bachelor’s degrees from both HAW Hamburg and USST. For the first time in the more than 30-year collaboration between the two universities the German professors and staff of SHC were unable to attend in person, but they sent their congratulations to Shanghai via video message.

The students, who were enrolled at both HAW Hamburg and the USST, began their studies at Shanghai-Hamburg College in winter semester 2016. The first year was devoted almost exclusively to the German language. The second and third years focused on subject-specific courses, with two courses each semester taught in German by HAW Hamburg instructors. The fourth year included an internship semester, which the five best students from each degree course spent in Hamburg at companies such as Lufthansa Technik and Jungheinrich, supported by a DAAD scholarship.

Most of the students were able to return to Shanghai to write their Bachelor thesis just before the outbreak of the corona pandemic in Europe. After that, all they had to do was pass the final oral exam in German and Chinese. ‘I commend them for what they have achieved,’ said German project manager Michael Röther in his video message for the degree ceremony. ‘Not only have they learned a new language in a very short time, but they have also acquired the necessary subject-specific knowledge and intercultural skills to play an active role in the emerging German-Chinese economic relations.’ Recent years have shown that at least one-third of SHC graduates aim to complete a Master’s degree in Germany, while two-thirds move directly into their first job in industry or trade.

Anyone interested in teaching at Shanghai-Hamburg College (both professors and academic staff are eligible) is invited to contact project coordinator Meike Rissiek.