Engineering student Danielle Kline always knew she wanted to study abroad in Germany, but things didn't originally go to plan. Leaving her comfort zone was a big step, but totally worth it. 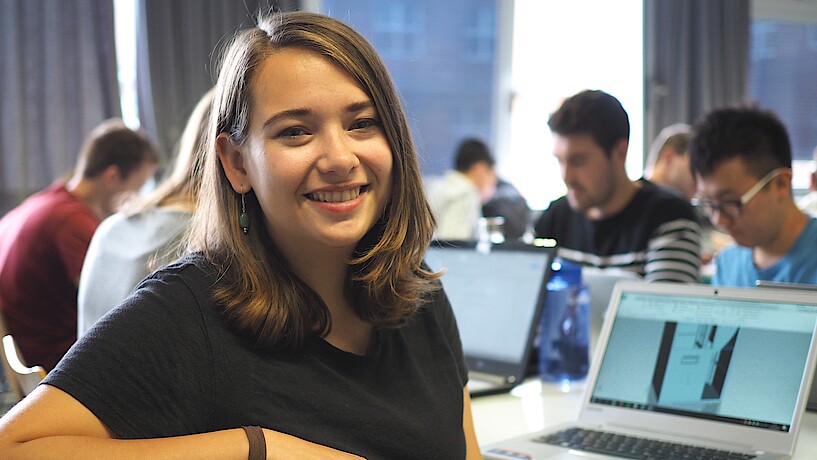 Danielle Kline, a 20-year-old mechanical engineering exchange student from the University of Pittsburgh, wanted to be in Germany. That was the plan from the time she was on school exchange. 'At middle school only five people took German in my year. I don’t know why but something drew me to it,' she remembers. 'When I was 14 I went to Ulm on exchange and it was life-changing. I wanted to travel; I wanted to be in Germany.' From day one of her freshman year at Pittsburgh she regularly visited the Education Abroad Office and asked, 'Is it too early to apply?' only to be told, 'yes'. At the beginning of her junior year it was finally time. She applied through the University of Pittsburgh collaboration with UAS7* for a study-abroad semester in Munich. 'A few weeks later I opened my email and read, "Congratulations! We would like to offer you a place at Hamburg University of Applied Sciences." I thought, OK, at least I’m going to Germany,' she remembers, laughing.

Developing an idea for Airbus

In Hamburg Danielle signed up for four engineering classes, three in English and one in German. Her favourite class is the Industry Team Design Project, for which she had to make a difficult choice. 'This class is on a Friday afternoon and signing up for it meant not having Fridays free for long weekends for travel,' she explains. Not an easy decision, we know, because study abroad is also about experiencing Germany and the surrounding European countries. But this class is special and when she talked to the professor about it, she was sold. Professor Jutta Abulawi worked for Airbus before she joined the HAW Hamburg and she brought her contacts with her. In her class students are put into teams and are asked to develop ideas for different aircraft issues. The projects come from Airbus, and at the end of the semester the students present their ideas to Airbus experts on site at the Hamburg plant. After four months Danielle can say: 'I really, really love it. It was 100 per cent worth it.'

Danielle is part of a team of international and German students working on one of six projects for Airbus. Her team is developing an idea for an integrated trash compactor in the galley to utilise currently unused space. They have to develop a design concept and CAD models, look at stress and cost analysis, and prepare the project documentation. Each team member has a specific role and they learn to work together as they would in industry. 'It is the coolest thing!' Danielle beams. 'At Pitt we focus more on theory. And even in internships the projects are more "intro tasks". This project allows you to work as an engineer and be part of the process of designing something. It has been invaluable, really invaluable!' 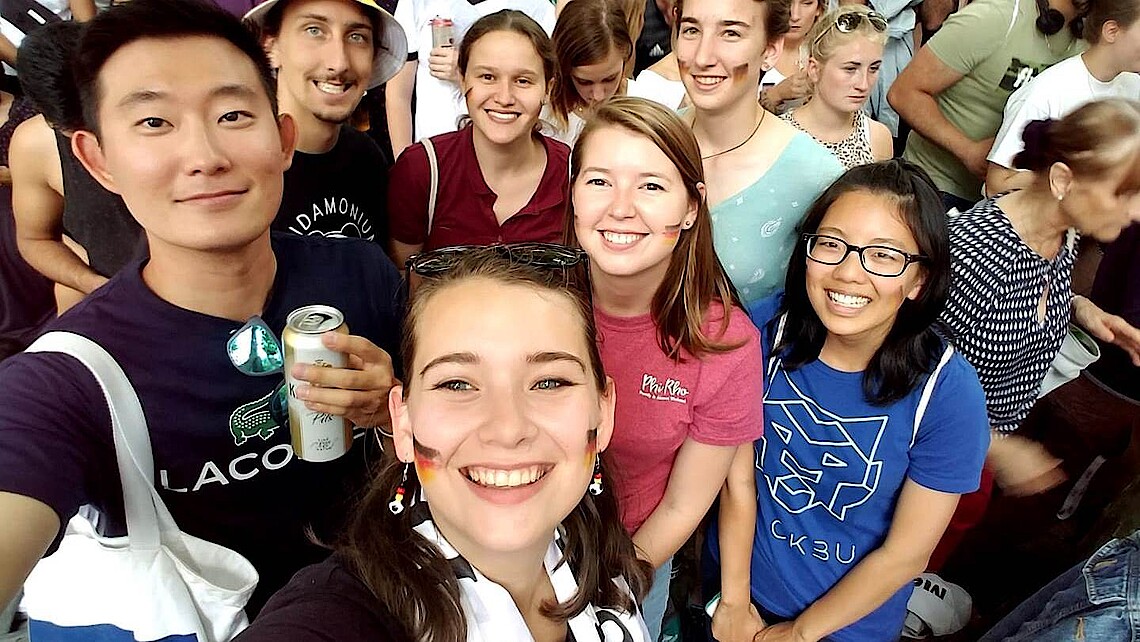 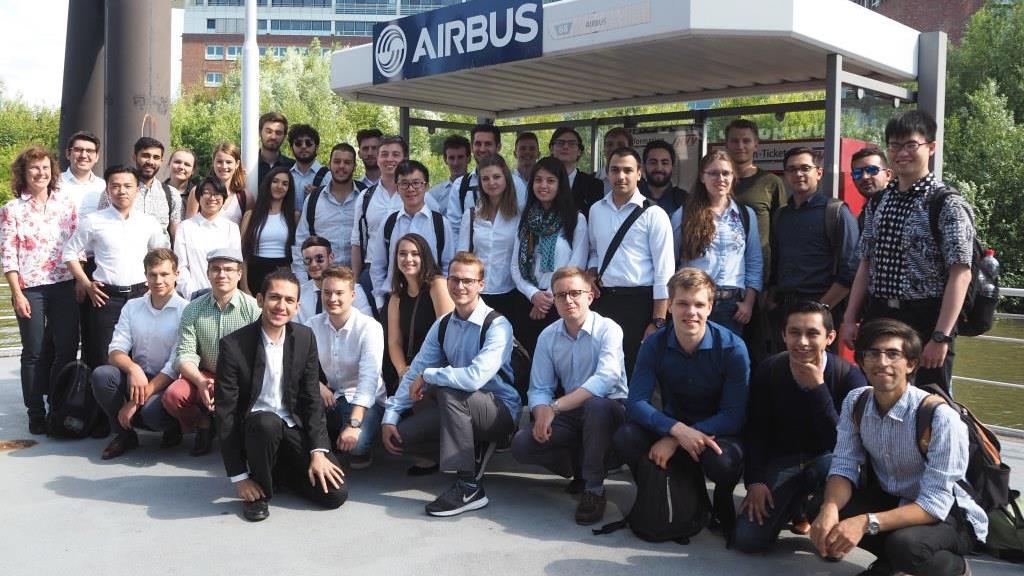 Getting to know Germany and the Germans

When we meet up to take photos of Danielle the room is buzzing with students in the final stages of their project work. The presentations at Airbus are in two weeks and there is still a lot to do. But Danielle’s group is confident that they will be ready, and it is lovely to see the easy-going way they work together. Team meetings aren’t always on campus. Often the students meet at one of their apartments, order in pizza and it becomes a social event. 'The cliché of Germans being cold and hard to get to know isn’t true. We laugh a lot together. They are fun to be around,' Danielle says of her team colleagues. 'And working with German students is great. I feel much more connected to Germany. They know how things work and it helps you get to know the place better. The other international students are great, but they are as clueless as I am in many things,' she adds, laughing.

Getting to know more of Germany was definitely one of her study-abroad goals. Before coming to Hamburg she volunteered for a few weeks on a farm in southern Germany. During her semester at the HAW Hamburg she has visited cities and towns from the northern coastal beaches to the mountains of Bavaria. 'It often takes a moment to sink in that I am seeing all the places that I read about in my school text books,' she says, smiling. Her knowledge of Germany has grown, as has her ability to speak German. After nine years at school she modestly considered her language skills 'half-decent' when she came to Hamburg. Over the past months she has become much more confident about speaking to people and understanding the different dialects. 'I never could have imagined that that was possible. The growth is just "whoosh"!' she says, drawing a curve with her finger from the table to the ceiling.

Danielle also took one engineering class in German.'Schwingungslehre (the theory of oscillations), has been an uphill challenge. It is a subject I have struggled with, so I put more effort into it than into any other class I have ever taken,' she reflects of her experience. 'It is very, very difficult, but I am doing everything by myself and in German! At home I was, how should I say, more relaxed about studying, so I will be taking those studying skills back with me to Pitt. And I kept telling myself, I will never have to do Schwingungslehre again!' she says, laughing.

Next steps outside the comfort zone

All these experiences combined have put a new idea into Danielle’s head. She is thinking about doing a Master’s degree in Germany after she graduates from Pittsburgh (sorry, Mom!). 'The German system fits my goals better than the US. I am not sure yet if I want to work in industry or in research, and in Germany graduate programmes are not so mutually exclusive.' She has done some research and talked to students and professors to find out more about the options within her chosen field of renewable energies. 'I think it would be great to get the skills in a country where there is a thriving industry and great career opportunities. I have the option to study in German or in English. And the financial factor also plays a role. In Hamburg I wouldn’t have to pay tuition for my Master’s,' she adds.

Listening to Danielle chatting away it is hard to imagine that there have been times where the whole 'studying abroad experience' was a challenge. 'I was so passionate about going to Germany, and yet the night before I was due to leave for Hamburg I was freaking out, thinking "Can I do this?"' she remembers. 'And that feeling comes back every time I start something new or go outside my comfort zone. But you do it and you love it and at the end you think, how come I was so afraid?' So going abroad is scary? 'Absolutely, but it is totally worth it!'

You do it and you love it and at the end you think, how come I was so afraid?