Exercises like 'ModTTX' (Modules Table Top Exercises) provide cross-border training for disaster scenarios. This year, the corona-related limits on contact threatened to shut down the exercise – until HAW Hamburg developed a digital solution. 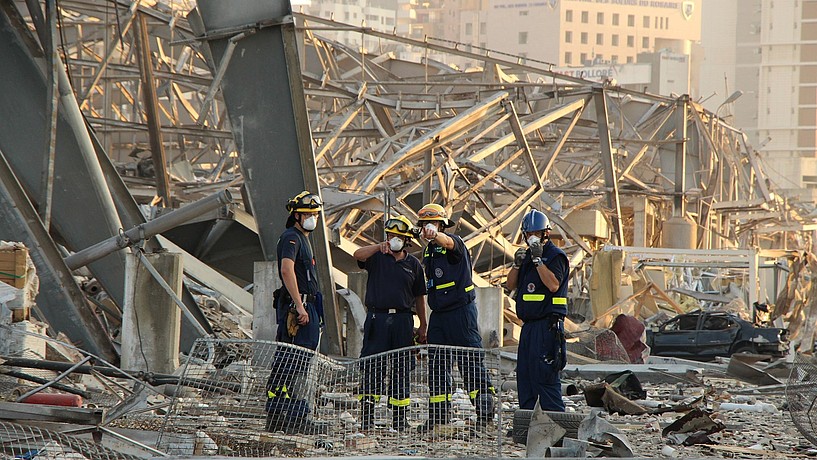 According to a UN report, the number of disasters around the world has doubled since 2000. Media reports about the earthquake in the Aegean at the end of October or the explosion in the Beirut harbour in August bring the drama of these events to our own living rooms and show us that well-trained emergency services personnel are often literally the difference between life and death. Exercises such as 'ModTTX' (Modules Table Top Exercises) provide cross-border training for emergencies.

Due to corona, this exercise took place digitally this year, for the first time ever. The underlying platform was developed by students in HAW Hamburg's Rescue Engineering and Hazard Control degree courses.

Professor Boris Tolg of the Faculty of Life Sciences and Jonas Jost of the foreign affairs office of the German Federal Agency for Technical Relief Work (THW) talk about their experiences with simulations – digitally and in real life – and their experiences in the field.

Professor Tolg, when did HAW Hamburg start carrying out disaster-management training?
Professor Boris Tolg: We've been carrying out mass exercises with up to 400 participants every two years since 2015. This is an immense investment of both time and money, but it is worth it. Because in reality it is often the case that a large number of rescuers encounter a confusing and unclear situation. The better prepared they are, the more successful they will be. The exercises take place on the HAW Hamburg campus, but of course the surroundings are also impacted.

So we have to rely on the tolerance of the neighbourhood. Still, the logistics limit how large the exercise can be. In a digital exercise, on the other hand, we can throw a city completely into chaos and carry out all kinds of command post exercises. These extend to triage exercises and the decision regarding life or death – the most difficult decision there is. But even in this respect training is helpful.

What falls within the field of disaster management?
Jonas Jost: There is a disaster management cycle: First of all there is prevention and preparedness, through measures that have to do with organisational processes or the secure storage of dangerous materials on the one hand, and staff training and more effective warning of the population in the event of a disaster on the other. And then of course there is the management of the actual disaster up to the restoration of a hopefully more resilient situation. In this cycle, the THW works at the interface between prevention and the events themselves. The focus at the university is primarily on prevention and preparedness.

Professor Boris Tolg: This involves exercises on various levels, from the micro level to the macro level. The micro level has to do with more practical exercises, like stitching up open wounds. The macro level has more to do with coordination. When a disaster takes place, a control room is usually set up to maintain an overview of the entire situation and bring together all the information. It's a little like the wide shot in a movie.

And the ModTTX project dealt with this 'wide shot'?
Jonas Jost: Exactly. ModTTX is an EU-funded project which carries out command post exercises at the European level, under the leadership of the THW. The current project will run for two years and the partners are from Germany, Belgium, Denmark, Slovenia and Croatia.

As it became clear that we wouldn't be able to train on location in a partner country in October because of the pandemic, we needed a digital solution really quickly. And HAW Hamburg delivered – within one month! This meant that we were the first to be able to carry out this project across Europe in this form.

Professor Boris Tolg: In this short amount of time, our students – supported by Karsten Loer, professor of hazard control technology for population protection; Markus Wiedemann, an expert on so-called mass casualty incidents; and me – were of course unable to develop a new software solution.

So we used open source solutions to build an overall system that enables communication via video conferencing or free telephone calls, and we used a green screen to put our participants in different environments – for example, in an airport in order to simulate the smooth arrival of people and materials.

Was the digital exercise a success?
Jonas Jost: Absolutely, and not just with respect to the content of the exercise itself – that is, the communication, coordination and organisation. We live in an increasingly digitalised world and have so far neglected this too much. Our experiences with the digital ModTTX are helping us move forward with the use of digital products. And that's helpful even beyond the pandemic.

There have always been situations where, for example, we couldn't fly to the excercise location. Extreme weather conditions or the eruption of the volcano in Iceland have sometimes meant that air traffic has ground to a halt. Digital exercises can't replace the practical exercises, but they can ultimately help us to stay effective.

Professor Boris Tolg: It's true that not everything can be learned digitally. You can't learn how to insert an IV drip online. But training in process and action sequences and communication works well digitally. ModTTX demonstrated this.

The exercises are meant to prepare rescuers for emergencies. You, Mr. Jost, were in Beirut for the THW following the explosion in the harbour there. Not your first mission...

Jonas Jost: But an ad hoc situation that we hadn't seen in this form before. We primarily have experience with natural disasters like hurricanes, floods or earthquakes. An explosion really is something different. After the Lebanese government requested international assistance, the German Federal Foreign Office also asked us to send a team to support the embassy.

In response, we put together two teams. One was made up of 50 members of the THW, together with International Search and Rescue Germany, and four dogs and was intended for search and rescue work. Unfortunately, they were unable to find any more survivors due to the severity of the explosion. There was also a parallel four-person team made up of three members of the THW and one person from the German Analytical Task Force. This team supported the embassy with crisis management, working at the so-called macro level. We gathered information: What actually happened? Who has been impacted? What state are the buildings in? Which international agencies are on site and continue to be needed? And finally, what does the disaster mean for us in Germany? Unfortunately, one of the victims was a member of the German embassy's staff.