Dr. Rebecca Sarku, a researcher from Ghana, has been awarded the Alexander von Humboldt Foundation's prestigious research scholarship. As part of the Multi-Agent Research and Simulation (MARS) research group at HAW Hamburg run by computer science professor Dr. Tom Clemen, she will spend the next two years studying how artificial intelligence – and in particular agent-based model development and simulation – can be applied to grow grain in West Africa more sustainably under climate change conditions. The scholarship is awarded to highly qualified scholars to enable them to carry out their research in Germany. 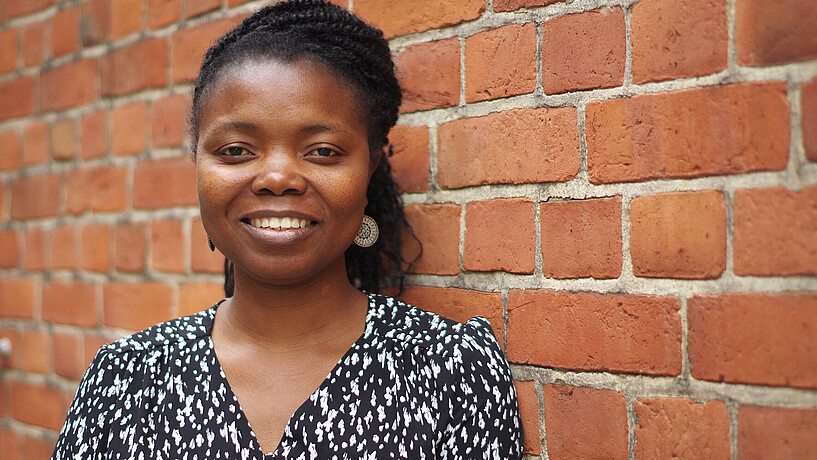 Rebecca Sarku grew up as one of four siblings in Tema, a port city not far from Ghana's capital Accra. At age 15 she started three years of boarding school, about a three-hour drive away in the Volta region. 'I only went home at Christmas and in summer. At the beginning it was very hard. But I also had a good time there, and I learned a lot about discipline at the strict school,' says the young researcher. For her Bachelor's degree in Geography and Rural Development she then moved to Kumasi in the south-central part of Ghana. It is no wonder that after so many different stops she returned home to do her Master's degree – at the University of Ghana in Accra. There she studied Geography and Resource Management and subsequently worked as an academic staff member.

The thing about the languages
Unlike the case in Germany, Ghana is home to countless languages and dialects. You won't get far with English outside of Ghana's capital Accra. 'I now speak four different languages,' says Sarku. Because she's still at the beginning of her German course, Google Translator is her all-around tool in Germany. She is only dependent on others in the metro, where she needs help from fellow passengers to understand the announcements. 'But I've now gotten good at knowing which of the passengers will speak English well and I ask them directly,' she says.

Cultural differences: 'We say a lot of things in a roundabout way.'
The young researcher enjoys working in international settings and views interacting with people from different cultures as a great benefit – even if some habits and customs are very different than in Africa. For instance in the Netherlands, where she did her doctoral studies in Wageningen, a small university city. There it became clear to Sarku that, for example, the relationship with time is very different than in Ghana: 'One time I wanted to go shopping and I couldn't believe that Aldi closed at 6:00 pm on the dot. They basically shut the door in my face, even though I wanted to go shopping. In Ghana that would be unthinkable,' she explains. At home the store would have waited until all of the customers were finished shopping. If they had said anything, it would have been 'in a roundabout way'.

Communication in Germany and the Netherlands is also much more direct: 'In Ghana we express criticism through sayings. Germans and Dutch people say what they think very directly. That was hard at the beginning, because in Africa that would be an insult.' Germany also seems very quiet to her: 'I miss the noise, the honking, the yelling, the dancing.'

Doctoral studies between Africa and the Netherlands: 'Sandwich PhD'
During her doctoral studies, Rebecca Sarku commuted between Africa and the Netherlands. 'I did a so-called sandwich PhD,' she explains. 'That means that I was partly in Africa, to gather data, and then in the Netherlands to keep working on my dissertation.' Although the Covid-19 pandemic put a halt to many research projects, for Sarku it sped things up: she made a conscious decision to stay in the Netherlands during the lockdown and buried herself in her work. 'I couldn't go out. There were fewer meetings. I had a lot of time and I used it,' says the researcher. In 2021 she defended her thesis, titled 'Making weather information services usable to support adaptive decision-making in farming in Ghana'. In it, she investigated farmers' local knowledge and observations in Ghana, asking to what extent they are suitable for predicting the weather.

Sarku's dissertation: Farmers' sayings as weather forecast?
When it comes to predicting the weather, farmers in Ghana tend to trust farmers' sayings more than the official weather service. These sayings are often passed down through generations and vary from region to region. 'If a mango tree has lots of blossoms in the spring, this means to farmers that it will rain a lot,' says Sarku as an example. Many events in nature thus take on a deeper meaning. To find out whether such predictions are correct, she programmed a simple app for farmers where they could enter information about when they detected a sign of a change in the weather. She then compared this with the official weather data. 'It's amazing, but I discovered that many of the predictions really work,' says Sarku. Her research approach is now being continued in Bangladesh.

Sarku's research at HAW Hamburg
It was a colleague who introduced Sarku to Prof. Tom Clemen from the Computer Science Department at HAW Hamburg. Prof. Clemen agreed to let her work as part of the MARS group, which was a prerequisite for applying for the Alexander von Humboldt Foundation's research scholarship. 'I am very grateful to Tom Clemen for that,' says Sarku.

She has been in Hamburg since the beginning of August. In her work as part of the MARS group she will focus on ensuring food security – specifically regarding grain – in Africa. To do this, she wants to use artificial intelligence to develop a system that maps farmers' production perspectives in order to predict, for example, where food crises could occur in future. 'In principle, I'm running through different "if-then" scenarios,' explains Sarku. 'This will help me identify what farmers would do in different situations.' It is important to Sarku not to simply conduct scholarship from within the ivory tower, but rather to publish, attend conferences, and talk to politicians and farmers.

And what does she do when she's not working? She's already decided on a project that she wants to complete in her free time: 'Learning how to swim,' she says. We're certain she'll also succeed at that.